Class – Forming Relationships with Plant Spirits to Empower Your Practice

A. Mato Watakpe, “Poppa Capp”, is a Priest of Alexandrian Witchcraft, an Upāsaka of Ch’an Buddhism, a devotee of Santa Muerte, and a seasoned ceremonial magician.

A mystic at his core, Poppa began studying occultism, religion, philosophy, and psychology around the age of fourteen. His exploration of devotional practice, experimentation with magical praxis and various divinatory methods, and his communion with spiritual entities commenced shortly after his studies began.

Poppa has been a full-time ritual spell worker, diviner, and astrologer, as well as a writer, teacher, artisan, and purveyor of spirituality and the occult since October of 2018. He has read tarot and deciphered astrological charts for hundreds of clients, and has successfully changed the lives of hundreds more through his spell casting services in just a few years.

During September and October of 2020, Poppa was invited to teach and present the monumentally in-depth Ceremonial Magic classes 101, 102, 103, and 104 with Crescent City Conjure’s Crossroads Academy. Poppa’s writing was first published in April of 2021 with Llewellyn Worldwide in Astrea Taylor’s book Air Magic. His contribution in Air Magic can be found on pages 156-159, under A. Mato Watakpe. He has been selling his artisan herbal occult products through his online store since November 2021, and his products have been sold in occult stores across the US since August 2022. He was an honored presenter at WitchCon and HexFest 2022, and was invited back for both in 2023. 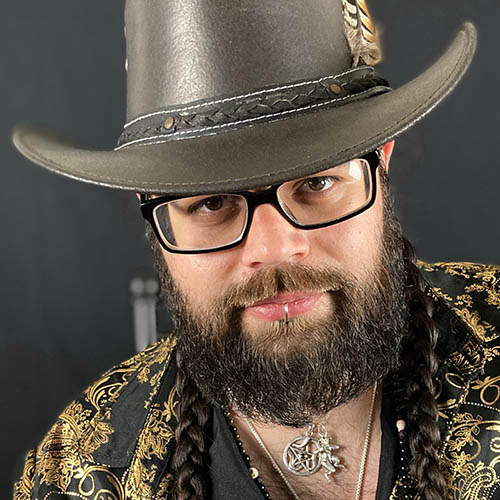