Since very young, Edu Scarfon has always been interested in topics related to the occut. In youth, he noticed the manifestation of what he later understood as psychic gifts. However, at the moment that these gifts came up, Edu didn’t consider them something pleasent or easy to deal with. Catching the thinking and emotions that come from other people, or, catching their pain, was something that bothered him a lot, just because he didn’t know how to deal with the subject.

In search for answers, Edu went through several religions, until he knew witchcraft. It was in this art, where he found more answers and even exercises, which helped him to deal with his spiritual sensibility. In 2009, he founded the Eleusinian Tradition, a Wicca segment dedicated to the sorcery, metaphysical studies, self-knowledge and to the the worship of the greek deities, specially Demeter, knew as the principal face of the Great Mother in this tradition. Next year, Edu Scarfon founded the Wicca Eleusinian Temple in São Paulo, the first religious institution of witchcraft, duly organized and based in Brazil. A local, not only with wiccan training, but also offering Tarot, Astrology and magic classes.

In 2012, Edu Scarfon traveled to Salem for the first time, known as the City of the Witches, in Massachussets, USA, where he had the opportunity to meet the renowned priestess and a writer of many books published all over the world, Laurie Cabot. This meeting enabled other trips to the place, when Edu took classes and was trained by the offcial Salem witch. He always says that this experience gave him the confidence to use his gifts.

In 2014, Edu was invited to the Reality Show “The Paranormals”, exhbit by SBT, which had as a proposal to test the gifts from a several paranormal, making a competition among them. Edu won the competition and become famous in Brazil, all over the country. So, he begun to be invited for many TV programs – task that he has been balancing in his daily life with tarot and psychical readings, performed by him, besides classes, rituals and witchcraft trainings (which has been conducing the temple).

Edu Scarfon has three published books: Greek Magic – How to access the Greek ancient Gods nowadays; The self-help work, healing your emotions; and the self-knowledge work, The God Oracle. 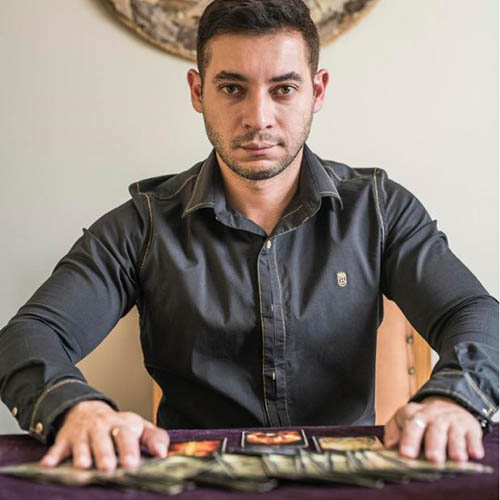