Class – MetaMagica: The Self as a Magical Instrument and Transformative Tool

Sat at 3:45 pm in in the Virtual Vendorium

Baba Teddy Jauw is a BabaL'Awo of Osun I'L'ode, an 'Oso' of Iya'ami Gelede, a Konchante of Gineh Yoruba VoDou and an Oluwo of Odu/Ifa in the Yoruba Traditions. He holds several pipes and wheels from several North and Central American traditions and was apprenticed to the famous Jungian Psychoanalyst Dr. Mary Loomis. His African traditional mentors are mainly Babatunde Olatunji, the famous drummer and Baba 'Oso' Teddy Ogounmilade of Ghana Beyin and Ile Ife (Epega Line).

His training is as a Paleontologist and Archaeologist which has garnered him precious little income but has opened the doors to many adventures and the many people that he has had the privilege t o know and learn stories from. He is the author of many books including the NowPunk Thrillers 'The Fourth Choice' and 'The Fifth World', the SteamPunk novels 'Teslation I & II" and the trilogy about his and his wife's life and histories, 'Zero's Journey', 'Absinthe, Alewives & Alchemy' and the latest 'Isis, Aisatta & Asiettes'. His next book 'MetaMagica' is being excerpted at WitchCon! 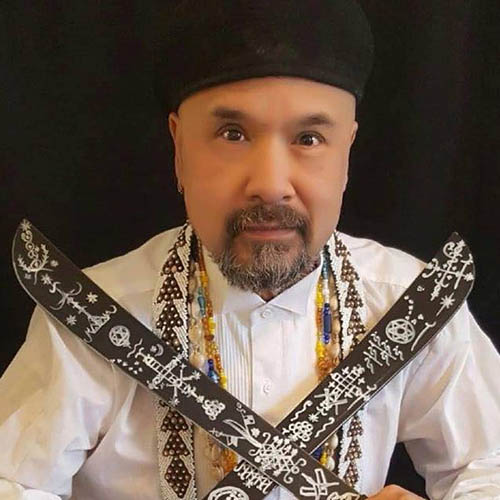